We’ve been working with partners in Assam, India for over a decade supporting local communities that are affected by human-wildlife conflict. Elephants are in competition with people for space and as they move between small patches of remaining habitat in the search for food and water they come in to conflict with people.

During the expedition to Assam two years ago, the team ran a series of workshops that focused on ways to improve livelihoods. Building up this sustainability will in turn build up the villager’s capacity to deal with the elephants they share this landscape with and reduce human-elephant conflict.

Chester Zoo’s lead horticulturist, Maile Belanger, was one of the team members who went on the zoo expedition two years ago. She was recently invited back to carry out more workshops with local villages. Below she tells us more:

“I had the great privilege of going back to Assam, India to assist in the work that the zoo’s Assam Haathi Project does in bettering the lives of people that suffer from human-elephant conflict.

“In February 2015 I was part of the Chester Zoo Expedition team that went to Assam to run a series of workshops with the aim of developing skills for alternative livelihoods. My role on the expedition was to prepare and present horticulture workshops. And on the back of good feedback from the trip I was asked to go again and visit new villages and repeat the same workshops.

“My first presentation focused on soil (soil texture, pH, soil nutrients, compost making, green manure) and the second focused on pest and disease prevention (type of pests, homemade/organic pesticides, diseases, avoiding diseases, homemade/organic fungicides, companion planting, crop rotation).  For my latest trip, I was asked to prepare a presentation on oyster mushroom growing. Well, this was completely new to me so in addition to doing some research on the internet I also bought myself a mushroom growing kit. I was also successful in growing some mushrooms before I left so I felt confident passing on my knowledge. 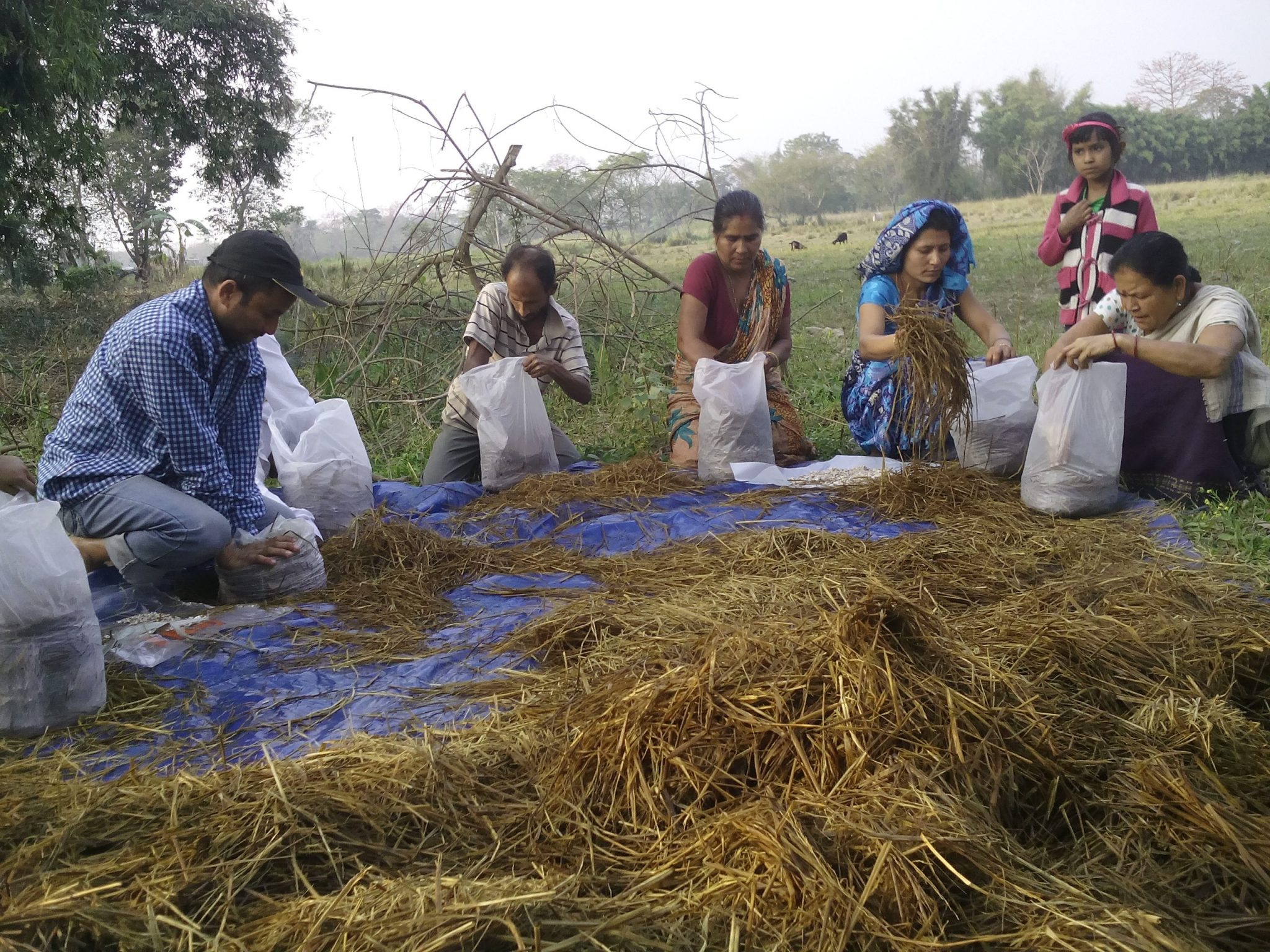 “In 2015 we visited villages where their main crop was rice and growing vegetables was just a side-line for some; but this trip would involve visiting villages where vegetable growing was their main income. The range of vegetable was wide and all familiar to me as I am a keen vegetable grower with my own allotments. This time of year the following crops were being harvested: okra, beans, aubergine, chillies, squashes, and cucumbers. The fields were being prepared for the planting of cabbages, cauliflower, potatoes, onions, garlic and greens.

“I was asked to prepare a fourth presentation focusing on some of the specifics of Vegetable Cultivation. This presentation focused on seed propagation, water saving watering techniques, and some extra tips on how to deal with common pets organically. The plan was to run four workshops, each workshop lasting two days in three areas of Assam, Biswanath, Sonitpur and Chirang.

“Unfortunately Assam was experiencing an extra warm autumn and the temperatures were around 35C each day. Another difference from last time I visited was how green everything was with the rice fields full of crop and leaves on trees.

I spent the first few days in Biswanath. This is one of the large tea growing areas and there was mile after mile of tea estates. The Assam tea plant is grown in lowland areas and amongst trees and is different from the Chinese tea plant that most people are familiar with.  Most houses had tea plants instead of lawns around their houses. The tea picked (all by hand even in the large estates) was usually sold to the large tea estates to be processed.

“The next area we visited was an area we went to in 2015, Sonitpur. To reach the villages for Workshop 2 we had to take a boat and then walk about five minutes. This was a rather small boat around the size of a Canadian canoe and there were eight people, four bikes and all our workshop equipment combined with a fast flowing river…exciting!  Just a few nights before we arrived a herd of elephants came through the area and caused crop damage and destroyed seven houses. Luckily no one was hurt.

“I just can’t image how scary that night must have been for the villagers. We were taken around the village to be shown the damage and also an electric fence that one family had tried to set up.  Unfortunately the electric fence was set up incorrectly and was not working.

“The villages are in one of the main elephant corridors that runs from the Nameri National Park to the Jia- Bhoroli river and the rice fields across the river. There is no electricity in the villages so the elephants aren’t wary of going through. We crossed one of the smaller rivers by foot surrounding the villages to be shown the elephants. They usually forage in the forest during the day and come down to the river in the late afternoon for a drink. They then sometimes cross the river and go through the village to cross yet another river to continue to look for food. The elephants were about 0.5km away and only just grey blobs in my photos but nice for me to see. The AHP staff have said that they will give the villages some spot lights to help protect them in the future.

“While in this area we visited one of the villages I went to in 2015 to see one of the success stories from the workshops.  One of the families are now able to grow chillies for the first time due to using one of the organic pesticide from the ‘pest and disease’ workshop.  Before they were unable to grow the chillies because catepillars would eat the plants but now they don’t have that problem after using an onion and garlic spray.  One of the chilli varieties they are able to grow is the Bhut jolokia or ghost chilli (some seedlings have been supplied by the AHP project) which fetch a good market price and are used in deterring the elephants.

“The next area to visit was near Bongaigon, Chirang and the site of the first electric fence that was constructed by the AHP. This area is vulnerable because the villages are on the edge of the Manas National Park and the Bhutan boarder where the elephants are protected. The electric fence has vastly reduced the number of human-elephant conflicts and the villages have been able to grow vegetables again and make a living. A trial lemon bush living fence has been planted in the area with the hope that the elephants won’t like to go through a thorny natural barrier and that the villages will be able to harvest and sell the lemons. At the moment the fence contains seven rows of lemon bushes and is 25 meters long. The lemons have grown well and there are plans on extending the fence for a further 1km along the Manas National Park boarder.

“Overall I believe most of the information I presented was familiar to the attendees or they were doing the practices but maybe didn’t fully understand the benefits, just following tradition. The vegetable plots I did see seemed to be very productive.  There was definitely a desire to learn more about organic methods of growing especially for larger scale vegetable production. All attendees were very welcoming, attentive, took notes and were not afraid to ask questions. All attendees received a translated version of my presentation notes and will receive a certificate of attendance.

“I feel very honoured to have been able to present my workshops to all the areas that we went to and hope I have helped in some way.  If I haven’t helped in improving the growing of vegetables I hope I have at least helped in forming a good impression of the AHP and cemented a great working relationship between myself and the AHP staff.  I hope the staff feel they can contact me whenever and ask any questions as I want to help as much as I can even from a distance. I know I have at least encouraged the AHP staff to give mushroom growing a go.”