A history of lions at Chester Zoo

As our pride of Asiatic lions settle into their incredible NEW home, we reflect back on the history of lions at Chester Zoo and how one man’s vision led to inspiring stories and unforgettable memories from staff and visitors, including an inseparable friendship between a dog and a lion cub…

When George Mottershead first bought Oakfield House for the sum of £3,500 back in 1930, his dream of a ‘zoo without bars’ was edging closer to a reality and in 1932 the first animals started to arrive.

By 1937, the zoo was accommodating African lions acquired from both Bristol Zoo and Dublin Zoo in a lion habitat opened by Lord Leverhulme to a crowd of excited visitors. The Chester Zoo team were solely responsible for the build with the cost of the materials met by donators. Wishing to eventually expand upon this area, George proposed to one day build a large, outdoor habitat that would have both indoor and outdoor areas – the largest lion habitat of its time. 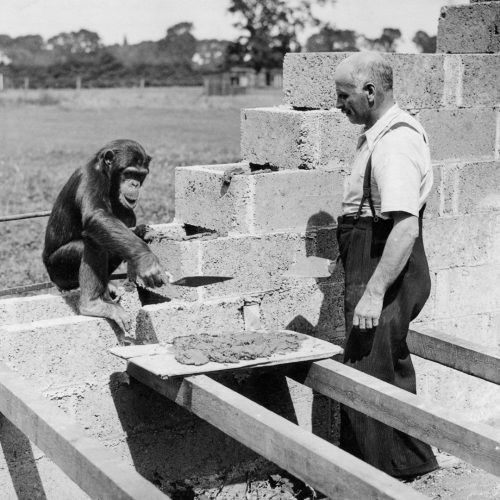 In the early days of the war and during their time in the original habitat, the lions famously managed to break loose. Three mischievous cubs would frequently wriggle free under the doors – much to the delight of visitors who would stroke and play with them! On this occasion, three full-grown lionesses managed to wander out into the zoo after a young keeper forgot to close the paddock gate. After a bit of commotion and a lot of excitement, the keepers managed to entice the lions back into their habitat using chunks of meat. The lionesses were coaxed back just in time as shortly after, Cassandra, the more troublesome of the three females, gave birth to four healthy cubs. A few years later George commented on the events of that day;

We were not unduly put out that morning, but the following day…I can assure you we felt very limp and washed out – the excitement of that crowded hour had certainly been a bigger shock than any of us realised or had been prepared to admit at the time.

Over the years, more cubs were born at the zoo and additional lions were relocated from other zoos. By 1941, 14 lions were prowling the paddock! Visitors were drawn to these incredible animals and in 1942, the zoo made a profit for the first time.

The passion of the Mottershead family remained the driving force behind the zoo’s success and it was all hands on deck during difficult times. When a young lion cub called Christie was orphaned after her mother died during a breech birth, she was brought into the family home, Oakfield House, where she formed a special bond with George’s daughter, June Mottershead. Other lion cubs had been hand-reared at the zoo, however Christie was the only lion to live in the house with the family, often entertaining herself by taking chunks out of chairs and sharpening her claws on the upholstery! Eventually, Christie became too big and went to live with the pride. In later years, June would fondly remember Christie as having the ‘sweetest nature’.

During the war years, an unlikely friendship blossomed between a little Sealyham terrier called Peter and a lion cub named Mowgli. After the unexpected death of Mowgli’s two siblings, the cub almost died from grief. Peter turned his affections to the little cub and the pair soon became inseparable. Visitors flocked in large numbers to see the unlikely pair who played, ate and slept together in the same habitat for four years until Peter’s death. It was the greatest friendship between different species the zoo had ever known.

Opening the new, outdoor habitat in 1947, where the lions remained until earlier this month, George finally realised his dream of keeping lions behind chain link fencing. This was the first time chain link fencing was used in a zoo habitat and can now be seen used in many other zoos around the world (including in our new lion habitat).

The ambitious new habitat offered visitors a bird’s eye view of the expansive paddock and was enthusiastically received. The specially developed habitat was safe, solid and the chance of another escape was highly unlikely due to higher walls and sturdier gates.

Over the years, the lions continued to be a visitor favourite and in 1994, keeping with zoo conservation efforts, endangered Asiatic lions replaced the African lions. Many healthy cubs were born at the zoo and the Asiatic lions thrived in their habitat. In 2011, two lionesses, Kumari and Kiburi, arrived to join 12-year-old male, Iblis, to form the pride we still have at the zoo today. In 2016, our very own TV show, The Secret Life of the Zoo, launched on channel 4 and became a roaring success – especially an episode of season 2, which centred around the Asiatic lions. Visitors came from far and wide to catch a glimpse of the famous felines. 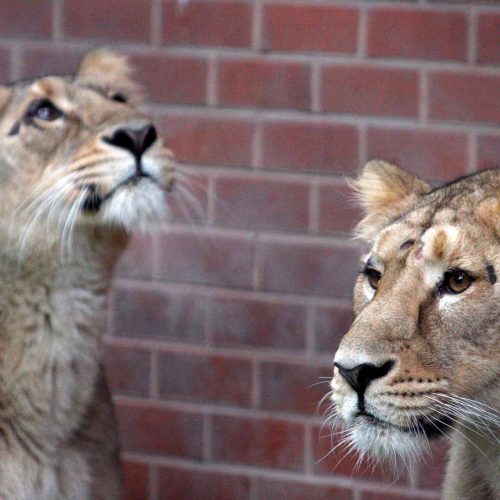 As part of our ongoing long-term plans for the future, in 2017 we decided it was time for a brand new habitat fit for a king – and his queens! Designed to recreate the environment of the Gir Forest region in India, where the last few hundred of the species live in the wild, we wanted the new habitat to raise visitors’ awareness of the threats faced by Asiatic lions in the wild, including human-wildlife conflict, and the conservation action needed to protect the species. We hope that immersing visitors in the natural surroundings of the Gir National Forest will do just that. The expansive zone spans 4,790 square meters and has been specially created for the lions.

Our incredible new habitat is now open and offers visitors a chance to get up-close to these amazing animals. The old lion habitat will soon be transformed into a picnic area, but we’re keeping the Chester Zoo lions history alive! Visitors will be able to sit in the new picnic area under the same trees that the lions have lived and played under for decades, surrounded by the historic buildings of the zoo, including the Mottershead family home, The Oakfield (now our contemporary British pub), and the old stables where visitors can find lion scratch marks on the external walls!

Take a look at our amazing new habitat here

Send us your lion stories and we’ll share them on this page!